How to have impact: The #WaspLove Game

Recently I read that from 1st March 2020, UKRI are scrapping ‘Pathways to Impact’ and “Impact Summary’ from their grant applications.  As a PI I welcome the news that the grant application process will be ‘simpler and more streamlined’; and I share the relief with many colleagues that we are no longer required to shoehorn our pure research programmes into something that has direct impact on society and wellbeing. However, I think we might be missing out: the Pathways to Impact provided us with the excuse (and funds) to take our science outside its box and do ‘something a bit crazy’ with it.

The crazy thing I did with my PtI is this: wasplove. 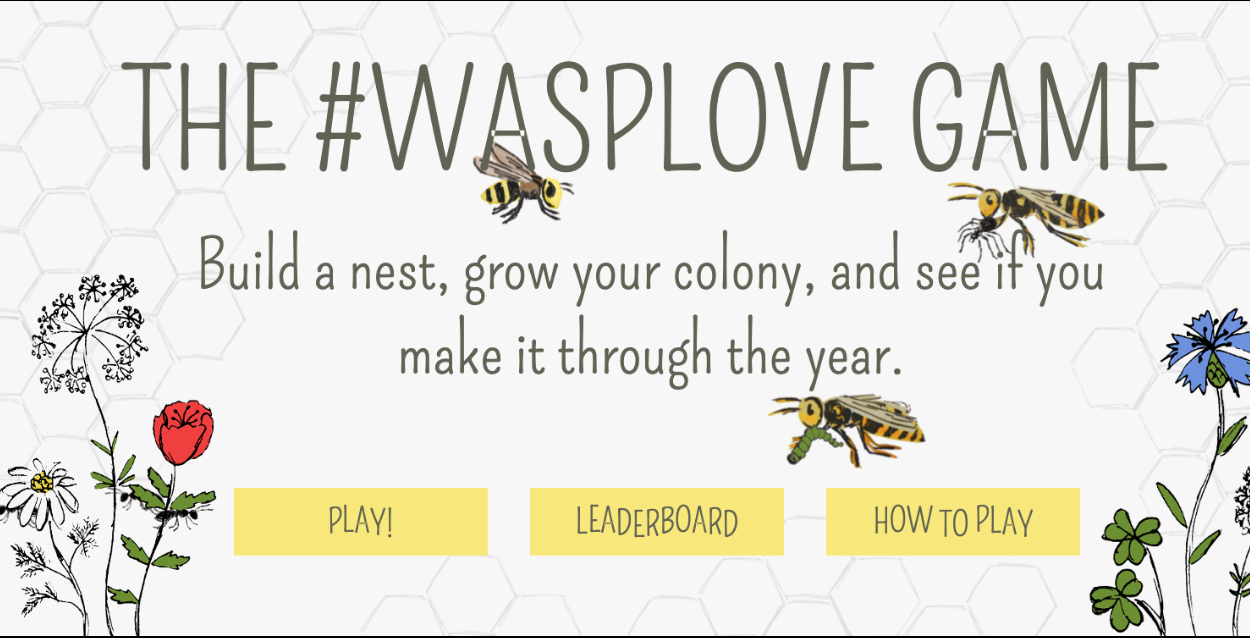 I work on social evolution and behaviour: my NERC grant was on the molecular basis of a major transition in evolution, using wasps as a model. We took different species of wasps that exhibit key behavioural innovations across the the transition from solitary to social living, and examined the molecular basis of the behaviours: these provided us with snap shots of how this major transition unfolds, at the molecular level. To do this we sequenced a bunch of wasp genomes, transcriptomes and proteomes and generated a load of behavioural field data on wasps from around the world. How can this possibly have any ‘impact’ on society, economy and wellbeing?

When I wrote the ‘Pathways to Impact’ I decided not to do any shoehorning: I simply stated “this grant will have no impact of immediate relevance to society, economy or wellbeing”. Instead, I said we’d make a computer game to help people learn more about the amazing lives of social wasps.

Thanks to the innovative skills, artistry and perseverance of Amber and Dave at Fo.am, the WaspLove game went live a couple of weeks ago: it’s open source and available for anyone to play at wasplove.com.  Why is it relevant to major transitions and social evolution? Most people understand a social insect as something like a honeybee or ant society, with their huge matriarchal societies headed by an egg-pumping queen and aided by hundreds of ‘sacrificial’ sterile workers. These societies are incredible feats of evolution: they are superorganisms. But, has it ever occurred to a member of the public how these societies evolve? Our computer game allows people to step into the waspy shoes (aka tarsi) of an insect society that represents the early stages of this remarkable evolutionary process. The rules are based on the well-studied European paper wasp – Polistes dominula. We tried to include some of the main traits of these societies; e.g. seasonal constraints influence when the colony will die; the need to build up your worker force before you can produce sexuals; the costs (risks) of foraging (you get lost in rain storms, eaten by birds, sprayed with pesticide!); range of nest predators and parasites (ants carry all your brood away; parasites eat their way through your nest); worker egg-laying comes with a cost to the colony (‘sneaky’ worker-laid eggs get eaten!). Ultimately, you need to build up your nest, successfully produce sexual offspring who disperse, mate (that’s the ‘love’ bit, in case you were wondering) and overwinter, ready to make a new nest the following spring.

The WaspLove game went a bit crazy on social media when it was released, with players of all ages (from kids to PhD students to dedicated professional gamers), from around the globe reporting it as “dangerously addictive”; that you should “expect hours of your life to disappear”; and “This game is pretty bloody awesome”.  Across 3,914 games have been played over the last 14 days since release. There is some astonishing gaming talent out there! I wasn’t sure whether to be delighted or horrified to learn my own PhD student was No.2 on the leaderboard…

This project would not have been made possible without funding via the PtI for my NERC grant. It provided the funds (and the excuse!) to enlist gaming and tech developers Amber and Dave at Fo.am, whose award-winning  work includes hugely varied projects with scientists designing  solutions for research, communication and outreach (other NERC funded projects along these lines include Mongoose2000 for better monitoring of wildlife behaviour, AccessLab workshops for decentralising research skills to broad communities, and Cricket Tales for crowdsourcing insect behaviour research. ). They are based in Cornwall and, thanks to their connections, the Wasplove game is also now installed as an interactive exhibit at the Eden Project, propelling the ‘impact’ of this project from online to a physical entity in a world-renowned educational public attraction, with over 1m visitors/year.

It’s been a blast working with Amber & Dave: they forced me to think clearly about what the key social traits are that make a Polistes nest buzz; their seemingly simplest questions often had me stumped. Working with organisations like Fo.am helps you step outside the box and take a fresh look at what your science is about, why it matters and how to communicate that to the outside world. Without the requirement of a PtI in UKRI grant applications, scientists will be less motivated to think broadly about who might be interested in their work, and moreover will lack the resources to do so: there will be less excuse or opportunities to work with boundary-pushing innovators like Amber and Dave.

I guess, I’ll just get back in my box. With my wasps.