Ed: We were delighted to host A-level student Elo Wilkinson-Rowe in our lab for two weeks in the summer of 2018. She threw herself into being a research scientist with great gusto, and seems to have enjoyed herself. Read her Blog below. If you are interested in the In2Science scheme (as a student or a host), see more here.

Two Weeks in a Wasp Lab 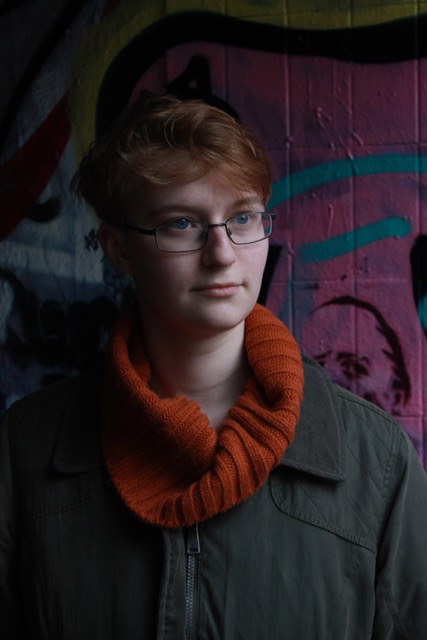 I received the news that I was to be attending a work experience in Dr. Sumner’s lab around four days before I was due to start, I’d read the briefing and thought ‘Oh, insects – that sounds like nothing I’ve ever done before; it should be pretty interesting’. Fast forward to July 20th, exactly two weeks later at the end of my work experience and you meet me now: a previously-ambivalent yet somehow-reformed lover of wasps, who’s also determined to spread the word of Soapbox Science across the world through the accompaniment of my Soapbox Science canvas bag, which has fielded questions from Dublin to Amsterdam – it’s brilliant!

When I arrived at the UCL Lab where Dr. Sumner was based on Monday morning, I was greeted to numerous books and large posters of wasps cloaking her office walls and she gave me a brief introduction of her work there; talking about the eusocial ‘altruistic’ behaviour of wasps and the phenotypic plasticity of the wasp genome to allow worker wasps to become queen when needed ‘changing its caste’ – with some of her current research addressing both how and why insects evolved into sociality over time. I spent most of my first day being introduced to the research students on Seirian’s team, and being shown around their labs. In the afternoon I was also able to meet with Fern, a volunteer in Seirian’s lab, who was analysing bumblebee behaviours, determining whether pesticide presence in nectar affects bees’ social behaviour. We sat together watching through a couple half hour videos of bees interacting in the red-lit experiment and I truly began to witness one of the most dramatic insect soap operas of all time – from the ‘Antennation’ (contact of the antennae) to the Butt and Grapple, these bees were living out their own unperturbed socially volatile lives. 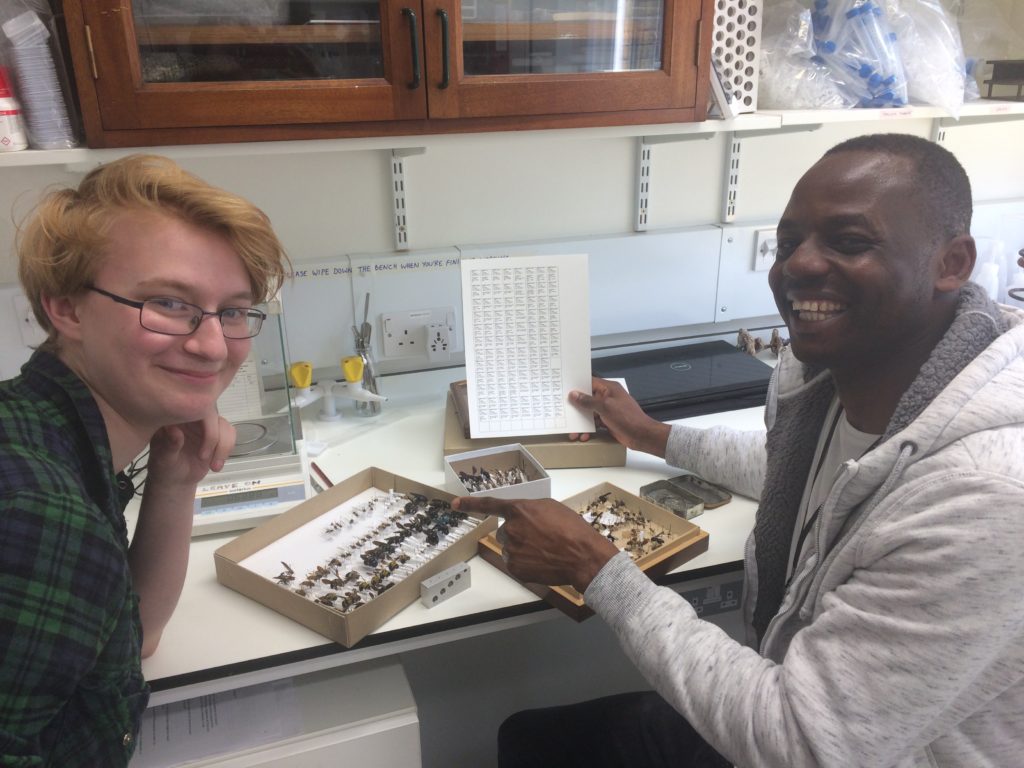 In2Science student Elo Wilkinson-Rowe, learning about West African wasps from Commonwealth fellow, Dr Ikechukwu Onah (aka as ‘IK’) from the University of Nigeria.

My second day saw me on my first field trip, to the Natural History Museum (to meet with Dr Gavin Broad) with IK, a Commonwealth Fellow visiting Seirian’s lab from Nigeria looking to photograph and sequence the DNA of his diverse West African wasp collection for identification in the NHM Cocoon lab. I was shown to the backroom entomology labs and given a tour of their 20 million strong insect collections, ranging from the their beautiful parasitoid wasps and all their Holotype organisms (with which they compare all subsequent species to) to their evolution of wasp nests. These mass collections are used internationally for species comparison and evolutionary research. The Aculeata ovipositors proved uniquely fascinating, as wasps use their long spindly ‘tails’ to pierce a nest open, paralyse the creature inside with venom glands, and deposit their eggs to hatch and grow. The tour also led me further afield into the other of the Museum’s collections – to their giant squids still preserved in liquid and their differential dry and wet specimen collections. Wet specimens being preserved in spirits for physical preservation and observation but their DNA is subject to degrading unless flash frozen or stored in liquid nitrogen, so dry specimens are preserved outside of liquids which maintains their DNA for gene coding. This led us to lunch, and after food on the museum’s rooftop kitchen with the RAF’s 100th anniversary celebrations flying overhead, I was let loose to explore the museum as a visitor from down below. 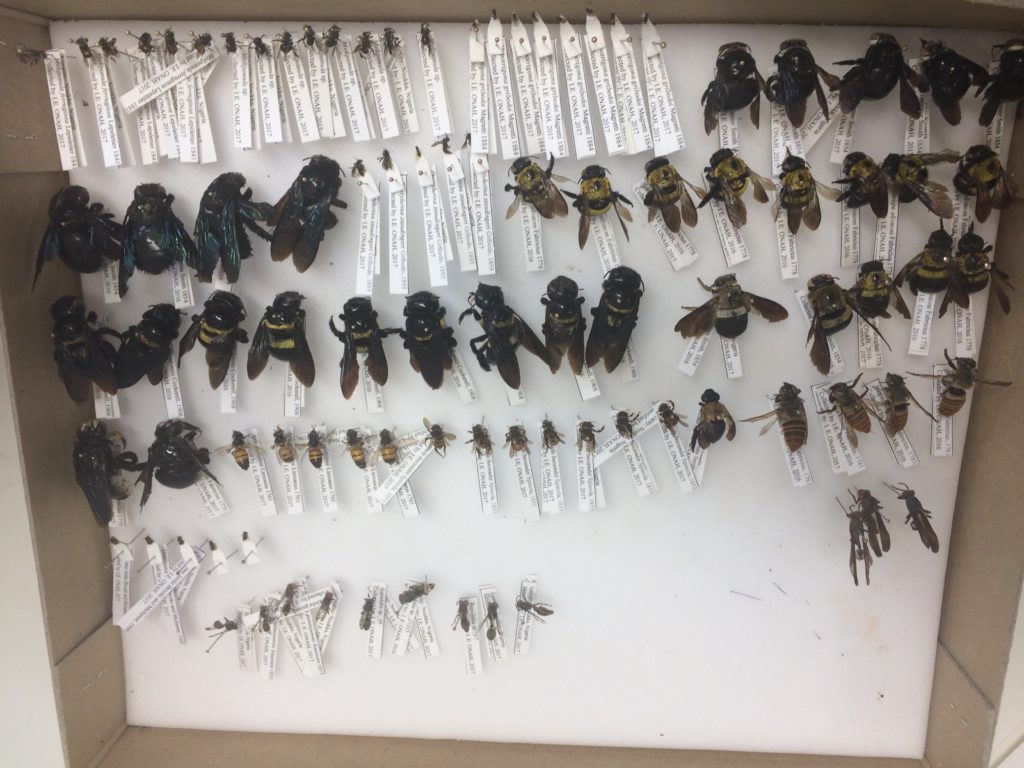 My second field trip occurred the very next day to the London Zoo, Institute of Zoology (IoZ) where I met Isla Watton, who works with Seirian on a Women in Science initiative, Soapbox Science; Seirian co-founded Soapbox with her colleague Dr Nathalie Pettorelli at IoZ 9 years ago. I was grateful to be shown around the Institute of Zoology and meet the research students working there, many of whom worked on biodiversity indicators and spatial analysis of conservation efforts before we sat down to teach me more about the aims and practices of Soapbox Science (to give women scientists the opportunity to speak out about their research and engage the public to participate in science) and more about their upcoming event at the BlueDot festival where Soapbox was going in a couple of weeks. Once more in the afternoon I was let loose into the Zoo to wander around, learning more about their coolest animal – the bats. 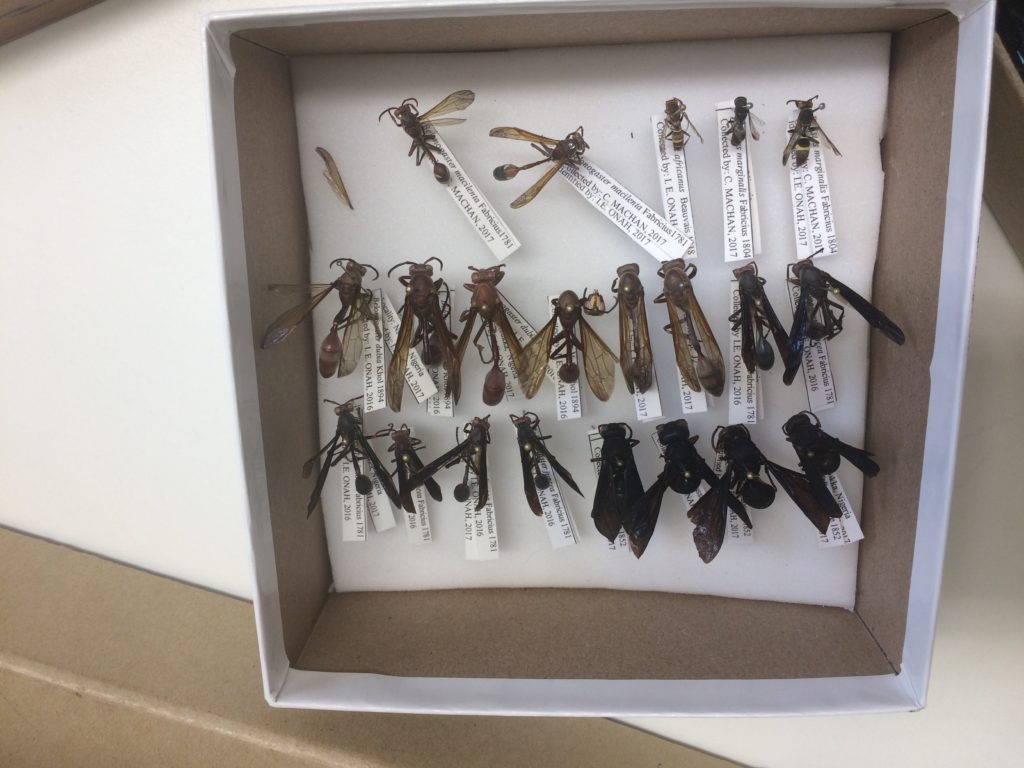 On Thursday I spent my first proper day in the Lab working with IK again. I’d attended a lunchtime seminar with Seirian of a post-doc proposal about the spread of pathogens across interfaces between matrices (urban areas) and patches (natural area), but the afternoon in the lab brought me firmly back to wasps again. I was taught how to pin insects through the thorax on the right side, to ensure you can still observe symmetrical markings that are important for identification; this felt like a special moment to finally pretend I was a renowned natural historian who’d just returned from travels abroad collecting new specimens for identification. Later IK taught me how to use a PCR Machine to amplify a segment of DNA and I was allowed to help make the test tube mixtures.

I returned to Soapbox Science on Friday with a PhD student, Iulia Darolti, who was spending 3 months as an intern with Soapbox as part of her BBSRC funded PhD programme to help with the development of a new branch: ‘Soapbox Then and Now’ which intends to use women scientists of today to bring women scientists of the past, who have been overshadowed by their male counterparts, to life using museum exhibits. We had a few ideas for potential scientists to focus on, including Margaret Alice Murray (archaeologist), Ruth Bellairs (who worked in developmental biology with chicks), Mavis Batey (who worked as a code-breaker at Bletchley Park during WWII), and Dame. Kathleen Lonsdale (who was an Irish crystallographer with some ground-breaking discoveries). I then spent the afternoon exploring three museums close by for any relating exhibits. The Wellcome Institute and the Grant Museum of Zoology proved unfruitful; but the Petrie Museum of Egyptian Archaeology provided a new option through Amelia Edwards, who was an Egyptologist and co-founder of the Museum, providing many of its artefacts from her travels during her literary career and after.

My second week started with the Sumner lab weekly Lab meeting, where we discussed options for methods of wasp experiments, to determine which drinks wasps are most attracted to in their natural environments; the struggle came when determining how to repeat for control when working in multiple locations as the landscape is unlikely to be uniform. Most of this week was dedicated a lot of time to helping Shaughn Anderson, a MSc student of Seirian’s, with sorting out the insect bycatch of the 2017 Big Wasp Survey and identifying the insects that were collected. I was taught the fundamental differences between flies and Hymenoptera (flies having a singular wing pair, large eyes, and almost minimal antennae in contrast to wasps and bees), and armed with an insect identification guide I set off under the microscope with my forceps and bright green gloves. While the smell of old insects stored in ethanol is nothing to be romanticised about, it wears off fairly quickly, and can almost be forgotten until a particularly crammed test tube is opened. Much of the bycatch was easily identified who seemingly have an affinity for beer as well, but some much cooler insects were also discovered, the earwigs provided continual delight, fleas were a strange surprise and the moths (and their larvae) appeared massive next to the rest. A couple ‘true bugs’ were an interesting discovery, which is where the distinction between bug and insect was made known to me, and the few solitary wasps and bees I identified were worth the numerous flies. For Shaughn’s sake the two inch spider will never be mentioned again.

On Thursday we took a trip up to the Royal Entomological Society in Hertfordshire which is based in old abandoned rose gardens, allowing the wildlife (and hopefully insect population) to flourish. After meeting the ginormous Leaf-Cutter Ant statue out in the front of the building, Shaughn, Seirian (and her 2 year old, Theo!), and I entered the rose gardens to scope out some possible trap locations for wasp experiments later in the summer. The initial lack of insects, particularly wasps, began to lay some doubts in the potential of the gardens as a trap location but their prey started to appear on the plants and Shaughn’s discovery of a wasp nest just off site reassured us of the site’s eligibility. We had lunch under a large tree in the middle of the gardens, and scoped out some differing trap locations before heading back to the station after the hot day. 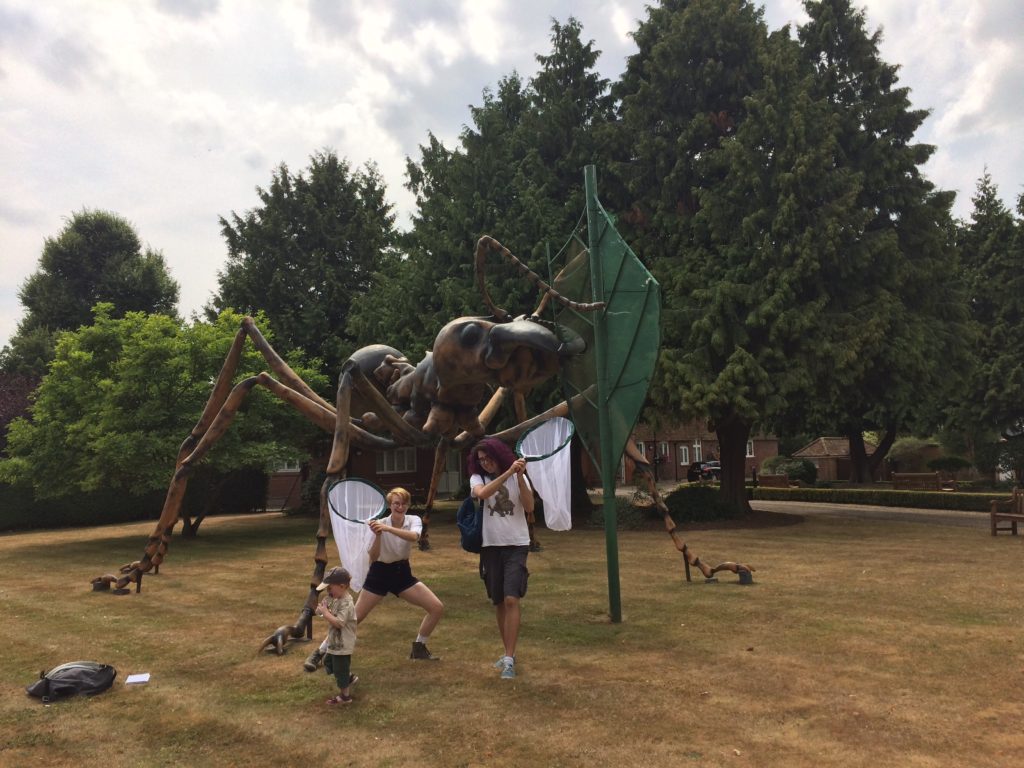 On my final day I was able to meet with the other Head Researchers in the CBER office to learn more about their fields of interest and some research that didn’t involve wasps! Prof Kate Jones, who looks at past biodiversity trends to predict future impacts, I was able to bond with over a mutual appreciation of bats; and Dame. Prof Georgina Mace enlightened me on some of her governmental work and work on the IUCN’s Red List. Similar to both Kate and Georgina, Dr Tim Newbold also worked with biodiversity, understanding how human activities are affecting it and which species are under the most threat from human activities and climate change. I spent a couple more hours working with Shaughn on the 2017 bycatch before heading home for the last time, with my Soapbox Science bag in tow.